Eat Yourself Capitalism and the Long Descent

I'm looking over the comments in a past Ecosophia post and came across these two articles:

The term "catabolism" refers to a an organism which feeds on itself to live. "Catabolic Collapse" then is a collapse that to sustain itself must feed on the society that it comes from. In a situation where there is too much excess in a society that doesn't have to be bad. These articles though point out that the economic system of Capitalism tends to take all things to extremes and that "Eat Yourself" is not a sustainable way to run an economy. It is though a great way to loot the last dregs of profit.

"In the previous era of industrial expansion, catabolic capitalists lurked in the shadows of the growth economy. They were the illicit arms, drugs and sex traffickers; the loan sharks, debt collectors and repo-men; the smugglers, pirates, poachers, black market merchants and pawnbrokers; the illegal waste dumpers, shady sweatshop operators and unregulated mining, fishing and timber operations.

However, as the productive sector contracts, this corrupt cannibalistic sector emerges from the shadows and metastasizes rapidly, thriving off conflict, crime and crisis; hoarding and speculation; insecurity and desperation. Catabolic capitalism flourishes because it can still generate substantial profits by dodging legalities and regulations; stockpiling scarce resources and peddling arms to those fighting over them; scavenging, breaking down and selling off the assets of the decaying productive and public sectors; and preying upon the sheer desperation of people who can no longer find gainful employment elsewhere.

Without enough energy to generate growth, catabolic capitalists stoke the profit engine by taking over troubled businesses, selling them off for parts, firing the workforce and pilfering their pensions. Scavengers, speculators and slumlords buy up distressed and abandoned properties – houses, schools, factories, office buildings and malls – strip them of valuable resources, sell them for scrap or rent them to people desperate for shelter. Illicit lending operations charge outrageous interest rates and hire thugs or private security firms to shake down desperate borrowers or force people into indentured servitude to repay loans. Instead of investing in struggling productive enterprises, catabolic financiers make windfall profits by betting against growth through hoarding and speculative short selling of securities, currencies and commodities.

Social benefits, legal and regulatory protections and modern society itself will also be sacrificed to feed the profit engine. During a period of contraction, venal catabolic capitalists put their lawyers and lobbyists to work tearing down any legal barriers to their insatiable appetite for profit. Regulatory agencies that once provided some protection from polluters, dangerous products, unsafe workplaces, labor exploitation, financial fraud and corporate crime are dismantled to feed the voracious fires of avarice."

There's a lot to unpack in both articles and I'll have to re-read them to comment more but it does seem like we are seeing the first overt steps of that final looting going on now, without even the decency of hiding in the shadows anymore.

Vulture capitalists have been around since (at least) the '80's. Which makes sense, since I see genuine peak prosperity in the early '70's. The first time I personally became aware of these bastards was the hostile takeovers of small redwood logging companies in the mid-late '80s. Those companies (while admittedly not exactly conservationists) had 100 year cut-plans and after the takeovers the vultures cut EVERYTHING and dumped it on the market. In 1988 you could buy clear redwood for the same price as crappy pressure treated southern pine; that's how insane it was. Then those same bastards closed the mills, ruined the economies of those little mill towns and took off with their quarterly bonuses leaving the companies in bankruptcy. Ecologically, economically and morally, it was one of the most disgusting things I've ever seen. If more of THAT is what we have to look forward to, I am going to suggest that we start shooting sooner rather than later. Forget waiting 'till you see the whites of their eyes. Shoot the first ones and maybe the news will spread.

END_OF_DOCUMENT_TOKEN_TO_BE_REPLACED 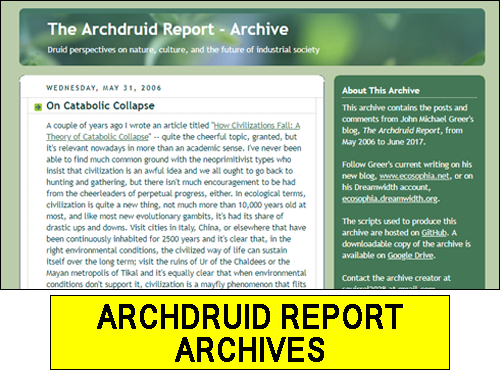